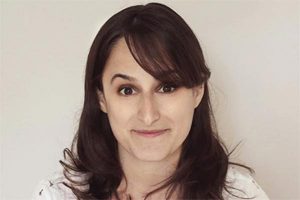 After completing graduate school in Computer Science and Engineering (CSE) at UC San Diego, Sarah Meiklejohn (Ph.D. ’14) moved half-way round the world to become a professor of computer science and cybersecurity at University College London in the UK. She continued to do groundbreaking work on cryptocurrency and blockchain technology, and in February 2016 she returned briefly to San Diego to present a paper at the 2016 Network and Distributed System Security (NDSS) Symposium. The topic: “Centrally Banked Cryptocurrencies.”

In it, Meiklejohn and fellow University College London professor George Danezis envisioned a cryptocurrency called RSCoin that could be issued by a central bank and which could get around some of the pitfalls inherent in Bitcoin, the most widely used cryptocurrency today. Those obstacles: scalability, transparency, and governments’ inability to control the supply of Bitcoin.

Sarah Meiklejohn is already one of the best-known experts in the world on the subject of Bitcoin and other cryptocurrencies. The CSE alumna co-authored a series of high-profile papers starting with “A Fistful of Bitcoins,” which she presented at the 2013 Internet Measurement Conference in Barcelona. In it, Meiklejohn and her co-authors presented a “longitudinal characterization of the Bitcoin network, focusing on the growing gap — due to certain idioms of use — between the potential anonymity available in the Bitcoin protocol design and the actual anonymity that is currently achieved by users.” Put simply, the Bitcoin to which many criminals flocked to take advantage of its vaunted anonymity, was found to be not so anonymous after all.

(A further journal iteration of “A Fistful of Bitcoins” was published in the Communications of the ACM in April 2016, again with co-authors including one of her Ph.D. advisors, Stefan Savage, director of the Center for Networked Systems at UC San Diego.)

Meiklejohn also included Bitcoin in her Ph.D. dissertation on “Flexible Models for Secure Systems,” for which she received UC San Diego’s 2015 Chancellor’s Dissertation Medal. She was nominated for the medal by her other Ph.D. advisor, CSE professor Mihir Bellare, who noted that Meiklejohn’s thesis helped shape government policy, including through a novel technique to track Bitcoins that is “now used as a key forensic tool by law enforcement.”

In 2015, Meiklejohn and fellow UCL professor Danezis noticed something in the Bank of England’s One Bank Research Agenda. “The Bank speculated on how central banks might issue cryptocurrency,” recalls Meiklejohn. “That is what got us started.” The result was an academic article by Meiklejohn and Danezis on “Centrally Banked Cryptocurrencies,” which she presented at NDSS 2016. The paper introduced a cryptocurrency framework called RSCoin. Like Bitcoin, it would be a decentralized blockchain-based transaction ledger where all computers in a network must approve a transaction before it is recorded in a new ‘block’. That is how new Bitcoins and other blockchain-based currencies generate digital money supply.

But unlike Bitcoin, the RSCoin framework “decouples the generation of monetary supply from the maintenance of the transaction ledger.” In short, whereas the supply of Bitcoin is determined (up to a maximum) by the number of new blocks created using decentralized computers, the supply of RSCoin would be decided by the central bank (as occurs with the money supply of regular currency).

As proposed by Meiklejohn and Danezis, RSCoin would remain based on blockchain technology, but a central bank could appoint a limited number of banks to process RSCoin transactions for the ledger through a “distributed set of authorities, or mintettes, to prevent double-spending.” The central bank would hold a signing key with which it could effectively maintain control over supply of the digital currency.

“While monetary policy is centralized, RSCoin still provides strong transparency and auditability guarantees,” explained Meiklejohn at NDSS 2016. “We have demonstrated, both theoretically and experimentally, the benefits of a modest degree of centralization, such as the elimination of wasteful hashing and a scalable system for avoiding double-spending attacks.”

The researchers also argue that RSCoin would not sacrifice transparency, and it would use cryptography to combat counterfeiting.

The researchers at UCL tested their envisioned cryptocurrency on Amazon Web Services’ cloud computing platform, and they have published code for RSCoin in the Github repository.  Whether RSCoin or a cryptocurrency like it ever sees the light of day is purely speculative. So far, it has been a research-only effort, but it wouldn’t be surprising if a central bank looks seriously at their research. After all, a number of countries are already exploring the use of blockchain technology for their own purposes. The People’s Bank of China, for example, recently announced that it is working with Citibank and Deloitte on a cybercurrency based on blockchain technology, and Australia’s largest stock exchange is looking at distributed ledger technology to replace current clearing and settlement services subsequent to buy-or-sell stock transactions.

Meanwhile, the UC San Diego alumna continues to play a critical role in studying and discussing innovations in cryptocurrency. In June 2016 Meiklejohn co-organized the Summer School on Blockchain Technologies for the International Association for Cryptologic Research (IACR), and last February in Barbados, she co-chaired the third Workshop on Bitcoin and Blockchain Research.