The Center for Networked Systems (CNS) established the Alan Memorial Scholarship in 2015 to encourage a more diverse and inclusive community of engineers and to honor the memory of Alan Turing, the mathematician and cryptanalyst who co-founded the field of computer science. During World War II, Turing devised the techniques that led to breaking codes produced by Germany’s Enigma machine—a breakthrough credited with accelerating the Allied victory by more than a year. After the war, he was persecuted for being gay. He died by suicide in 1954.

The scholarship is for enrolled UC San Diego undergraduate students majoring in computer science or computer engineering, public policy, communications, and other programs touching on networked systems and who are active in supporting the LGBT community. In addition to receiving a scholarship, recipients have an opportunity to carry out guided research under the direction of one of the center’s faculty mentors.

CNS reached its endowment goal of $250,000 in February 2020. Many individual donors and corporate donors made this possible including a generous donation from the Amateur Radio Digital Communications (ARDC) in memory of Brian Kantor, WB6YT, a UC San Diego alumnus who worked at UC San Diego for 47 years, and the founder of the ARDC.

Email received from Dermot Turing (Alan Turing’s nephew) on April 25, 2019: “I am delighted that you are able to support students through the Alan Turing Memorial Scholarship and I am certain that this kind of initiative is one which would have received his whole-hearted support. As I expect you know, Alan helped support the education of a Jewish refugee boy escaping from Nazi Europe during World War II, and it is vitally important that young talented people get assisted in achieving their potential. Furthermore, it is essential to ensure diversity of talent, and in particular to encourage those who might feel that their interests or approach are out of the mainstream. Alan Turing is a role model, showing how it is possible to succeed – and to achieve the extraordinary. I hope he is an inspiration to those who receive the scholarship and I am proud to be able to support it in this small way.” 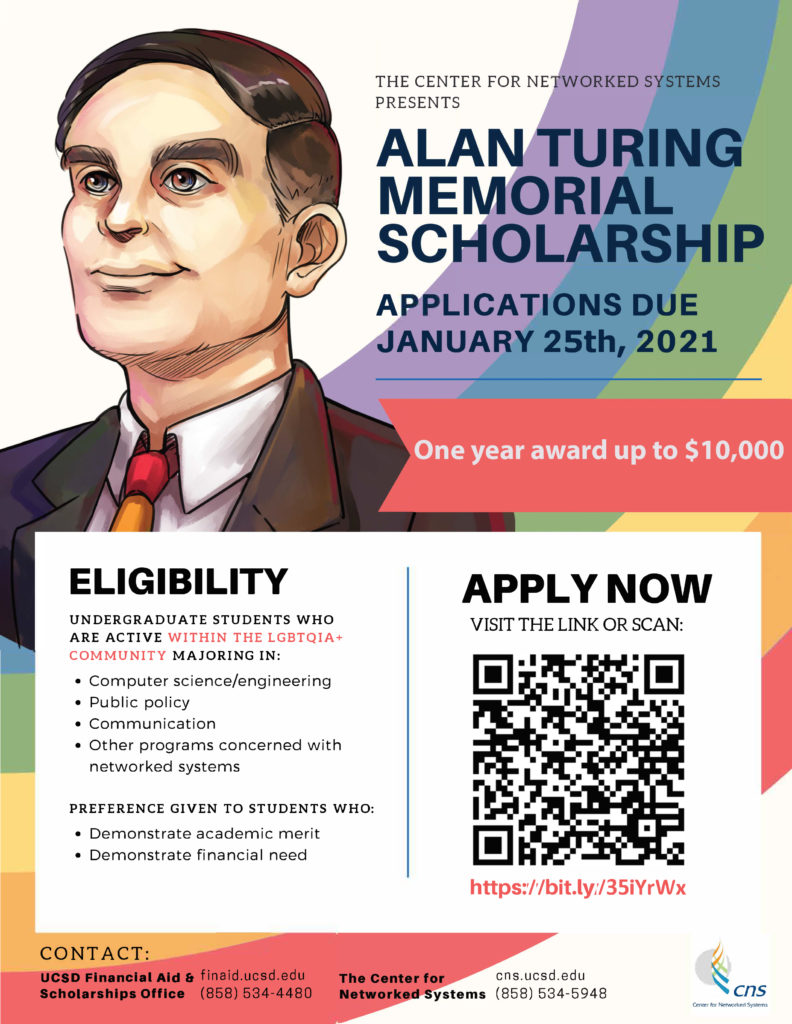 The selection committee will review the applications and the recipient will be notified in the summer of 2021.

If you have questions regarding the application process, please contact the UCSD Scholarship Office at finaid@ucsd.edu.

Awarded Fall 2020 for the 2020-2021 academic year, Eustaquio Aguilar Ruiz, a senior majoring in physics with a specialization in computational physics, has received the 2020-2021 Alan Turing Memorial Scholarship from UC San Diego’s Center for Networked Systems (CNS). This is the fifth year that CNS has recognized a student majoring in programs touching on networked systems who is active in supporting the LGBT+ community.

Awarded Fall 2019 for the 2019-2020 academic year, and thanks to a generous $10,000 grant from the Motorola Solutions Foundation, Giselle Mejia, a fourth-year student studying cognitive science with a specialization in design and interaction, is now among the 2019 Turing Scholarship recipients. A second student, who wishes to remain anonymous, was also recognized and will be awarded a scholarship through support from CNS.

Awarded Fall 2018 for the 2018-2019 academic year, Anton Sydorenko and Adrian Mendoza.  Thank you to a generous $10,000 grant from the Motorola Solutions Foundation.

Awarded Fall 2017 for the 2017-2018 academic year, Sothyrak Srey is the the second recipient of the scholarship.

Link to the project flyer

Video announcing the Turing Memorial Scholarship used in the Crowdsurf crowdfunding campaign [May 28,2015]