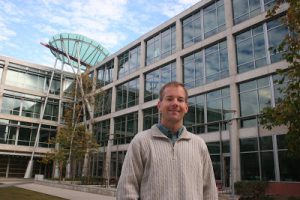 SIGCOMM 2016 – the week-long annual meeting of the ACM Special Interest Group on Data Communication – wrapped up Aug. 26 in Florianopolis, Brazil – the first time the conference has taken place in Latin America. The event moves to Los Angeles for SIGCOMM 2017, and UC San Diego computer scientist Alex Snoeren will co-chair the 2017 conference. CSE Prof. Snoeren (right) is a faculty member of the Center for Networked Systems (CNS), and one of half a dozen CNS members who have played leadership roles in one of the largest professional research communities in systems and networking.

2017 will not be the first time that CNS’s Snoeren has helped organize the SIGCOMM conference. In 2008, he co-chaired the committee responsible for workshops and tutorials. Other current or former faculty from UC San Diego have co-chaired SIGCOMM’s program committee. Former CNS director Amin Vahdat co-chaired the program committee in Brazil this year with Stanford’s Sachin Katti. (Vahdat remains an adjunct professor in CSE, but his primary employer now is Google.)

In addition to faculty who co-chaired SIGCOMM’s program committee through the years, other faculty have contributed to the process as a member of the committee (e.g., CNS co-director George Porter and ECE’s George Papen sat on the committee in 2015, and CSE’s Hovav Shacham did likewise with CNS research scientist Kirill Levchenko in 2012.

Indeed, every year since 2000, there has been a minimum of one CNS faculty member helping to chart the direction and agenda of SIGCOMM and its annual meeting. And in each of the past two years, four computer scientists and engineers have represented CNS and UC San Diego on the 2015 (Savage, Voelker, Porter and Papen) and 2016 (Vahdat, Papen, Snoeren and Voelker) program committees.

It’s not just CNS faculty who have taken on the responsibility of helping to steer SIGCOMM. In late August, CSE alumna Renata Teixeira (Ph.D. ’05) attended SIGCOMM in Brazil in her capacity as Vice Chair of the society – a position she will hold through June 2017.  The Brazilian-born Teixeira did her doctorate under CSE Prof. Geoffrey Voelker, one of CNS’s founding faculty members in 2004. Still a citizen of her native Brazil, Teixeira is also a French citizen, after working for France’s National Institute for Computer Science and Applied Mathematics (INRIA Paris) since she left UC San Diego in 2006 (after receiving CSE’s Best Dissertation Award for her doctoral thesis on network sensitivity to intradomain routing changes).