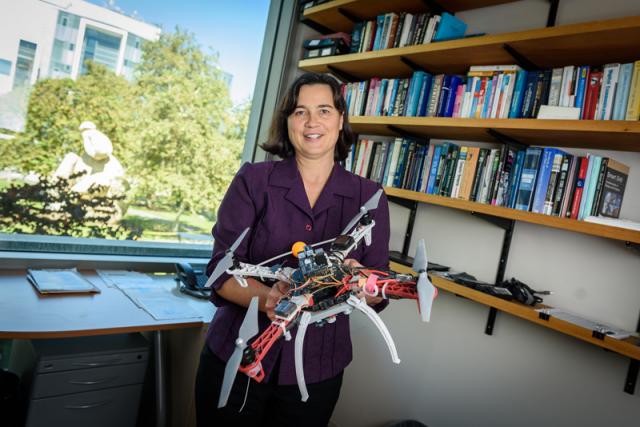 Tajana Rosing is among the latest faculty in the Computer Science and Engineering (CSE) department rewarded with endowed chairs at the University of California San Diego. The campus named professor Rosing to the John J. and Susan M. Fratamico Endowed Chair in the Jacobs School of Engineering.

Established in 2012 with a $750,000 gift from the Fratamicos, the endowed chair supports multidisciplinary research that includes engineering and the life sciences. Rosing is the inaugural holder of the chair.

“This honor allows me the freedom to focus on new and challenging research questions over the summer with my best and brightest students,” said Rosing, who joined the CSE faculty in 2005. “That kind of freedom wouldn’t be possible without the funding from the Fratamico chair.”

The computer-engineering professor is affiliated with the Qualcomm Institute and Contextual Robotics Institute as well as the Center for Networked Systems. Rosing is also a member of the Centers for Wearable Sensors, Energy Research, Sustainable Power and Energy, as well as Wireless and Population Health Systems and the San Diego Supercomputer Center.

The department and the campus are planning to honor Rosing at an event scheduled for January. “We are extremely thankful to longtime San Diegans John and Susan Fratamico for making it possible to bestow on Rosing a long-overdue honor in recognition of her ambitious research agenda and its real-world applications,” said CSE department chair Dean Tullsen. “Endowed chairs are often awarded to retain exceptional scholars, and in Professor Rosing’s case, her creativity and approach to research have had a deep impact on innovation in computer engineering.”

On the research side, Rosing’s System Energy Efficiency Lab (SEELab) focuses on energy efficiency in all kinds of systems, from sensor nodes to data centers, transport networks and power grids. In addition to energy-efficient computing, her primary research interests include context-aware computing, human-cyber-physical system design, embedded systems hardware and software design, resource management at the system level, and the design of approximate and highly efficient architectures. Going forward, Rosing will continue investigating efficient, distributed data collection, aggregation and processing of this data in the context of smart cities, wireless healthcare, the distributed Smart Grid for electricity, and Internet of Things applications.

Rosing is a leading researcher in the area of using information present in wireless systems to achieve more efficient system operation. This information can come from sensors’ observations of human behavior and needs, and also from various other environmental sensing systems, both stationary and mobile.  Rosing’s recent work has focused on efficiently extracting knowledge about context from such sensing sources, and leveraging that knowledge to implement distributed control algorithms for large-scale Internet of Things applications underlying Smart Cities infrastructure.  A recent example includes using drones to detect areas of higher air pollution collaboratively and dynamically, and to provide this feedback in real time in emergencies (e.g., forest fires), and in normal daily life (such as air pollution due to recent fertilization of nearby fields, or due to higher than normal and localized smog conditions).

The computer engineer has also leveraged context to optimize the operation and design of embedded systems by maximizing energy efficiency in exchange for controllable and tolerable inaccuracies in computation.  According to Rosing, this research resulted in systems that are up to 1,000 times more energy efficient with less than a 10 percent error in computation.  “These systems are especially applicable to many Internet of Things applications where the data sources themselves are not completely accurate,” said Rosing, noting that sensors can often have around 10 percent inaccuracy. “The large scale of data that is analyzed requires the application of statistical machine learning to provide information needed for feedback to people (e.g., local air-quality problems) or for control of other devices (e.g., where drones need to fly).

Since 2013, Rosing has played a leadership role in the TerraSwarm Research Center, a consortium addressing the huge potential (and associated risks) of pervasive integration of smart, networked sensors and actuators in the connected world. The center is administered by the Semiconductor Research Corp. (SRC), with funding from DARPA and SRC industry partners including Intel, IBM, Texas Instruments and other companies.  Rosing’s work on TerraSwarm focuses on context-aware computing with applications to proactive worlds and smart cities. Similarly, her work on air-quality monitoring in the CitiSense project with its principal investigator, CSE Prof. Bill Griswold, is part of the initial infrastructure for the Smart City testbed.

Asked about the real-world impact of her research in a recent issue of the UC San Diego alumni magazine Triton, Rosing cited longer battery life for smartphones. “My work involves optimizing the battery life, communication and storage of portable electronic devices, including cell phones, laptops and sensors,” Rosing told the magazine. “I also work on large systems, for example, optimizing smart servers to maximize quality of service while minimizing power consumption.”

“This research translates into significant energy savings,” she added.

Before UC San Diego, Rosing was a full-time researcher at HP Labs focusing on low-power wireless media and embedded systems. While at HP Labs in Palo Alto, she finished her M.S. and Ph.D. degrees at Stanford in 2000 and 2001, respectively. Rosing’s doctoral dissertation topic was “Dynamic Management of Power Consumption.” Prior to HP Labs and Stanford, she worked as a senior design engineer at Altera Corporation.

John Fratamico is the senior vice president and general manager of the Advanced Concepts Business Unit of Science Applications International Corporation (SAIC) and serves on the Council of Advisors at the Jacobs School. Susan Fratamico is the director of Strategic Planning at San Diego Gas & Electric (SDG&E).

In the interview with Triton magazine, Rosing was asked, “Throughout history, whose chair would you most want to sit in?” Her reply: “Marie Curie—she was amazing!”