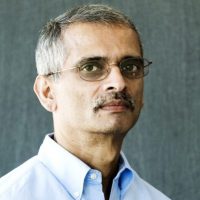 Ramesh Rao's research interests include architectures, protocols and performance analysis of wireless, wire line and photonic networks for integrated multimedia services. He is on the faculty of the department of electrical and computer engineering at UCSD, where he is currently professor and director of the San Diego Division of the California Institute of Telecommunications and Information Technology (Calit2). In 2004, he was appointed the first holder of the Qualcomm Endowed Chair in Telecommunications and Information Technologies in the department of Electrical and Computer Engineering of the Jacobs School of Engineering at UC San Diego, where he has been a faculty member since 1984. In addition to directing Calit2 UCSD, Prof. Rao is involved on a day-to-day basis with a wide variety of interdisciplinary and collaborative research initiatives, leading several major projects at Calit2. He has been a lead investigator on dozens of major federal-, state-, foundation-, defense-, and industry-funded grants, including the NIH-funded Wireless Internet Information System for Medical Response in Disasters (WIISARD), Self-Scaling Systems for Mass Casualty Management (WIISARD SAGE), and the Multimedia Telemedical Diagnostic System (STRokE DOC), the NSF-funded Responding to Crises and Unexpected Events (RESCUE) and ResponSphere projects, multiple projects involving cognitive networking, as well as leading several international collaborations. He has authored more than 230 peer-reviewed technical papers on a wide range of research topics in wireless communications including architectures, protocols, performance analysis of computer and communication networks, adaptive systems, energy-efficient communications, disaster management applications and health-related applications, among others. He is currently engaged in numerous projects to bridge emerging technologies with medicine and healthcare and investigating the power of utilizing information technologies to enhance, even transform, healthcare resources, knowledge bases, and outcomes. He earned his Ph.D. in electrical engineering in 1984, and M.S. in 1982, both from the University of Maryland, College Park, MD. He earned his undergraduate B.E. degree with honors in electronics and communications in 1980 from the Regional Engineering College of the University of Madras in Tiruchirappalli, India. In 2008, the National Institute of Technology (NITT), Tiruchirappalli, awarded him their Distinguished Alumnus Award.