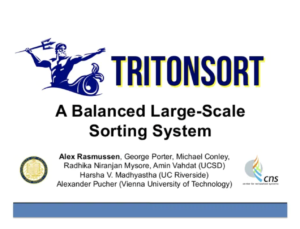 After breaking two of their own data sorting world records set in 2010, a team of Center for Networked Systems researchers succeeded in setting eight more by 2014. In fact, their system Tritonsort-MR sorted 100 terabytes of data in 1,378 seconds in the 2014 Sort Benchmark competition. And this is just one of the team’s many feats.

By continually making modifications to their system, the team has successfully competed in various categories in Sort Benchmark. One category that intrigued the team in 2011 was the 100 Terabyte Joulesort competition in which teams work to build a system that can sort the greatest number of data records while only consuming one joule of energy. Although the Tritonsort-MR team was more devoted to making their system directly applicable to the real-world needs of enterprises, they still won the Joulesort category despite the limitations that they placed upon themselves.

The Sort Benchmark committee awarded the team with medals at the 2011 ACM SIGMOD conference.