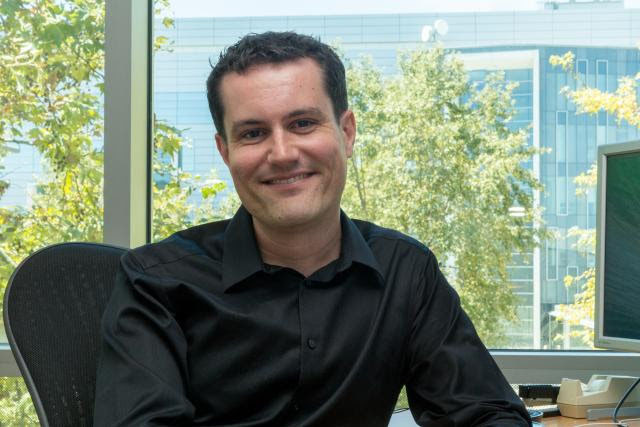 George Porter is among the latest recipients of Faculty Early Career Development (CAREER) awards from the National Science Foundation (NSF). The funding agency has earmarked nearly $700,000 for a four-year project on “A Scalable Multiplane Data Center Network.” Funding kicked off on May 15, 2016.
Porter is the Co-Director of UC San Diego’s Center for Networked Systems (CNS), in addition to being a professor in the Computer Science and Engineering (CSE) department of the university’s Jacobs School of Engineering.
NSF is committed to promoting the role of teacher-scholars, and the CAREER program is the funding agency’s most prestigious category of awards in support of junior faculty who exemplify excellence in both teaching and research.
As Porter outlined in his proposal, “Supporting the ever-increasing data rates required between literally hundreds of thousands of servers is an extremely challenging problem… [and] solving this problem is critical to building and deploying compute clusters capable of meeting the exponentially growing requirements of users and developers building new applications.”
He noted that industrial data center operators such as Google and Microsoft are relying on scale-out designs that are prohibitive in cost and “power-hungry”. As a result, said Porter, “inefficiencies due to network bottlenecks get magnified across hundreds of thousands of servers, resulting in huge costs.” One way around this logjam is the design of hybrid networks based on reconfigurable physical optical circuits from one part of the network to another, because such circuits would not require expensive conversion of optical signals into electric signals and then back to optical. Nor do they require transceivers or intermediate packet switches.
“However, due to technological and physical limitations, for next-generation data center bandwidths, we cannot simply ‘speed up’ existing hybrid designs,” explained Porter. “We eschew the idea of designing a single network fabric that tries to both support next-generation bandwidths and scale to thousands of endpoints,” explained Porter. “Instead, we propose a composite network fabric built from multiple, entirely physically independent sub-networks… that can each sale to thousands of nodes, yet are, by themselves, not able to meet the end-to-end bandwidth demands of the data center.” To meet those bandwidth needs, he added, traffic can be rapidly switched between the sub-networks.
Porter argues that using multiplane network nodes as the building blocks for end-to-end data center network topologies — instead of using conventional switching — can greatly reduce the number of switches, lower cost and power consumption, resulting in faster link rates. “A given set of sub-networks do not necessarily offer a circuit between each endpoint, meaning that some data must transit across a number of intermediate points until it reaches the ultimate destination,” noted Porter. “This indirection approach, coupled with physically separate sub-networks, is a unique aspect of our proposed systems research.”
Education is a critical component of CAREER awards, and Porter says that he will translate the research of his project into new and existing courses based on hands-on projects and system-building experiences, at both the undergraduate and graduate levels. For undergrads, he is planning a networking ‘maker’ course, and he’ll continue to mentor teams of students in UC San Diego’s Early Research Scholars Program (ESRP), which emphasizes underrepresented minority students and women getting involved in the research process. He also plans to create a series of videos for UCSD-TV to “provide the public and pre-college students with context for the challenges presented by powering the Internet and cloud computing, and highlighting the importance of the research in this area.”
NSF Abstract # 1553490
George Porter Website