Thanks to the Center for Networked Systems (CNS), Mansi Malik was able to attend what has become the premier conference for women in computer science (and for many men too). The second-year graduate student in Computer Science at UC San Diego was among the 35 UC San Diego students (including nine grad students) and 15,000 people overall attending the 2016 Grace Hopper Celebration of Women in Computing October 19-21 in Houston, TX. 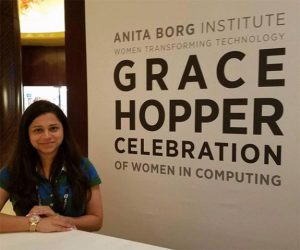 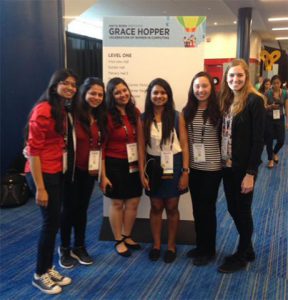 “It was really cool and exciting to see and meet so many women in computer science from all over,” says Malik, who expects to complete her M.S. degree in 2017. “A lot of great energy and excitement was going around, and there were inspiring talks by awesome speakers.” Malik says she was particularly inspired by the keynote speakers, including Latanya Sweeney, founder of Harvard’s Data Privacy Lab, IBM CEO Ginni Rometty, and Megan Smith, who was appointed Chief Technology Officer of the United States in 2014 by President Obama, from her previous position as a vice president of Google[x], Google’s advanced products unit. Malik was also impressed with the keynote by Salesforce CEO Marc Benioff.

Since 2011, CNS has sent one, two or three graduate students each year to the conference in the form of travel grants. “CNS took care of everything from travel to meals, ensuring that I had a smooth trip,” observes Malik. “It was an honor to represent both CNS and Graduate Women in Computing [GradWIC], and I hope to continue the relationship between GradWIC and CNS going forward.”

Overall, she says, the conference was a valuable experience. “There were great networking opportunities through the career fair and company-sponsored events and lunches,” explains Malik. “I also talked to a lot of recruiters and engineers from tech companies about GradWIC and built some industry connections for us so that we can host more events.” She also appreciated a session on negotiating salaries, in which she learned that for every four men who dare to negotiate for a better starting salary, only one woman will attempt to negotiate – and the problem spills over into other areas because many women are unaware that they can negotiate for more than just salary.

“My specialization is in Computer Systems, and I got a chance to meet a lot of systems pioneers through the conference, including inspiring leaders from Qualcomm, Microsoft, Google, and other companies,” notes Malik. “Talks on networking and the Internet of Things were particularly interesting from a CNS perspective.”

In an after-conference report to CNS, Malik also noted that because of its rapid growth, “a lot of the interesting-sounding sessions were in small rooms and filled up well before they started, leaving hundreds of people looking for somewhere else to go.”

The sessions were also heavily focused on industry. “Most talks were presented by industry leaders, and even the talks about academia or research were geared toward faculty,” says Malik. “There could have been more research-related sessions oriented toward graduate students.”

“Thanks to everyone at CNS,” says Malik, “for giving me the opportunity to attend the Grace Hopper Celebration this year.”

Many of the previous recipients of CNS travel grants to Grace Hopper Celebrations were also officers in GradWIC, including former VP Neha Chachra (who attended the event in 2011), Publicity Manager Karyn Benson (2013), and GradWIC Secretary Malveeka Tewari (2014).

The previous winner, Vicky Papavasileiou, in 2015 is a CSE Ph.D. student as well. For a full list of past recipients, visit the travel grant page on the CNS website.